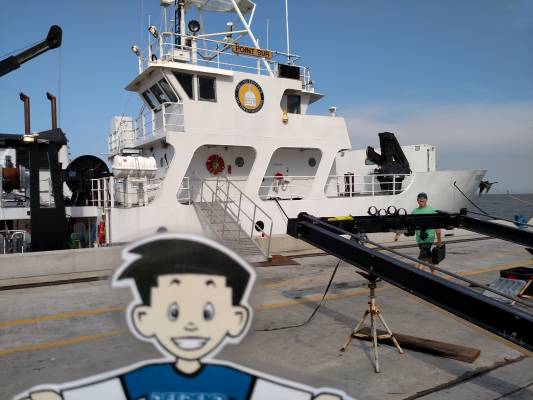 Hello! The weather got much better and we were able to load the ship with all of our gear. This is the RV Point Sur. It is a 136 foot ship that originally sailed in the Pacific Ocean for Moss Landing Laboratory but was recently purchased by the University of Southern Mississippi and now sails in the Gulf of Mexico. We use this ship because it has a lot of cable that conducts electricity to communicate with our fishing gear in very deep waters. Below is a picture of me standing on the frame of our fishing gear, a 10-meter MOCNESS (Multiple Opening/Closing Net and Environmental Sensing System). Right now all you can see is the frame because we put the nets on while we're at sea. I'll post more pictures later so that you can see it all put together. 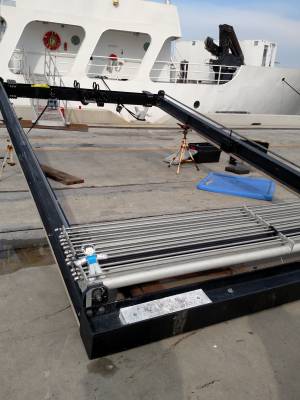 We also had to use a forklift to unload the acoustic transducer which is an instrument that uses sound to detect layers of organisms in the water column. You will see some pictures of this in a later post. 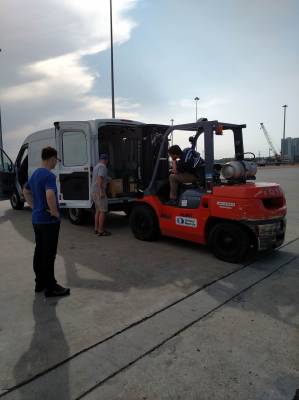 We departed early on Saturday morning and it took about 18 hours to get to our first station. We've been able to collect some environmental data from the water but due to technical difficulties we have not been able to deploy the MOCNESS yet. I will be sure to take some pictures and post again later today or early tomorrow to show you what we collect!

Last modified on Sunday, 01 May 2016
Flat Stanley
Flat Stanley has not set their biography yet
Author's recent posts