How does sound help DEEPEND?

Posted by Nicole Sandoval on Wednesday, 24 August 2016 in News

Have you enjoyed our updates from the scientists? Everyone has just returned to their labs and is working on their individual data-sets. In the previous posts we've seen a lot of images of the physical collection of organisms, but another one of the key components to the DEEPEND research is the collection of sound data! It's called bio-acoustics and it's another form of taking data that turns sounds into pictures for us to see! Ben, from Florida International University, was on the last cruise working the acoustics and was able to use the data to determine how many organisms were in the water. He is also able to tell us which different organisms were out in the water when he took his data. In order to collect his data, he sends different sound frequencies and pulse lengths through the water to identify fish and crustaceans. He can also track migration patterns of different organisms and is hoping to determine why certain patterns exist.

In the early morning, before the sun has started to rise, a mass migration of organisms swims from the epipelagic layer (sunlight zone) down to the mesopelagic layer (twilight zone). If you need a reminder on the layers of the ocean, you can view it here; http://www.outreach.deependconsortium.org/index.php/kids-blog/entry/diving-into-the-deep

The migration cycle also takes place at night, but in the opposite direction! The same organisms will migrate up from the mesopelagic layer (twilight zone) to the epipelagic layer (sunlight zone) to feed throughout the night. Using multiple sonars, scientists can determine the different groups of animals through their own "acoustic fingerprint", or echo that each group of organisms produces when pinged at different frequencies. In the image below you can see the different groups highlighted in different colors and their migration patterns that were recorded over a 24 hour period in the Northern Gulf of Mexico.

In this echogram (pictured below) a school of larger animals were observed swimming through an area of high biomass, or (an area with a lot of organisms) the brighter color shows us the large concentration of organisms. Scientists think that the large animals pictured in this area were foraging, or searching for food! Pretty interesting to see it taking place, and all through sounds! 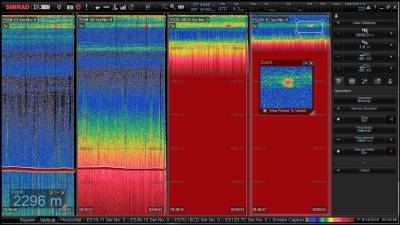 If you have any questions for the DEEPEND scientists, or Ben, please leave a comment! Until next time!