Denise is a science education researcher with a strong background in the biological sciences as well as teaching and learning. She holds a PhD in Ecology and Evolutionary Biology from The University of Tennessee Knoxville. Denise currently uses her expertise in her position as a laboratory coordinator for general education and majors Biology courses at the University of Illinois Champaign-Urbana. Denise takes a scientific approach to her research in order to attain a better understanding of teaching and learning in the biological sciences at all grade levels. She uses her research to drive curriculum development projects for K-12 and higher education instruction. In addition to her science education research Denise conducts biological research studies both in the laboratory and field setting (e.g., biodiversity inventories and genome sequencing). Denise is passionate about sharing her fascination of science and the natural world and as a result she is involved in many public education outreach endeavors.

Posted by Denise Kendall on Wednesday, 01 July 2015 in News

Squirt here with an update about the Blazing Seven cruise! The scientists spent six days at sea. They collected samples on five of these days. The scientists described the days to me as "beautiful" with a gentle breeze. They towed their nets in the clear blue waters at 48 places! The nets caught shrimp, squid, jellyfish, billfish, flyingfish larvae, and lanternfishes! 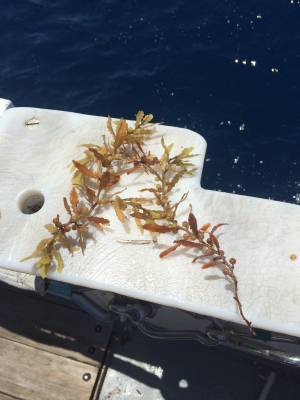 The Blazing Seven finished its cruise by heading westward to Port Fourchon in Louisiana. The next cruise will be setting sail soon. I'm so excited!

Posted by Denise Kendall on Wednesday, 24 June 2015 in News

Another DEEPEND cruise went out to sea! This time a different ship, the Blazing Seven, set sail on June 5th for a collecting trip! I hear the scientists woke up at 3 o'clock in the early morning to start their adventure. 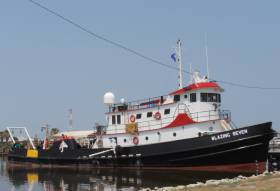 Throughout their time at sea the scientists on the Blazing Seven used neuston, ring, and bongo nets to sample the water. These nets are similar to the MOCNESS nets we talked about in an earlier blog post, except the neuston and ring nets only use one net instead of five. The bongo nets are two side by side nets and look like the picture below. The scientists on this cruise were not sampling as deep as on the R/V Point Sur cruise. The Blazing Seven scientists are sampling at 100 and 500 meters. That's about as deep as the Statue of Liberty in New York is tall (93 meters) and the Taipei 101 in Taiwan is tall (509 meters). 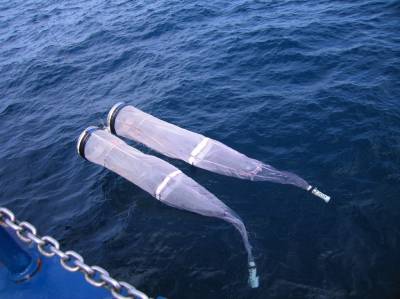 Their first catches included several lanternfish (in the family Myctophidae), deepwater shrimp, and many kinds of fish larvae. The scientists have also seen a lot of Sargassum, a brown seaweed. Check out the juvenile flying fish. 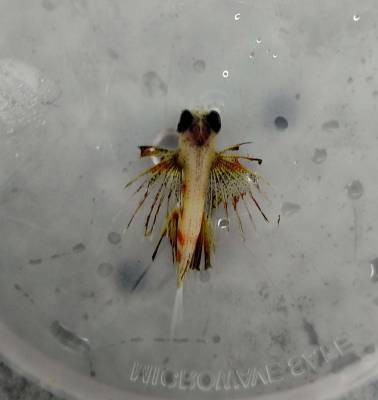 I'm excited to hear and see what the scientists find next!

Posted by Denise Kendall on Wednesday, 10 June 2015 in News

Whoa, what's that? It's so colorful! The DEEPEND scientists tell me that this is a siphonophore. Siphonophores belong to the animal group that includes corals and jellyfish. This group is called Cnidaria. Siphonophores are colonial animals. Colonial animals are multiple individuals that are connected and work together. Siphonophores can grow to be 40–50 meters long. That's about the length of a Blue Whale! Siphonophores feel gelatinous. This means they feel like jello! My favorite jello flavor is cherry, how about you? 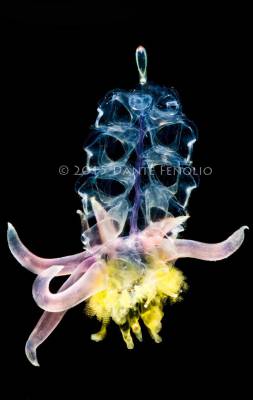 Siphonophores are active predators, just like the heteropods we talked about last time. They hunt small fish and crustaceans. When they get close enough, siphonophores use their tentacles to capture and reel in the prey. Some individuals of the colony are responsible for motions that help to move and orientate towards prey while others catch the prey or digest it. Each individual of a siphonophore has its own role to play.

That's all for today. See you next time! 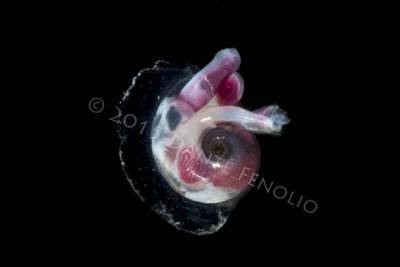 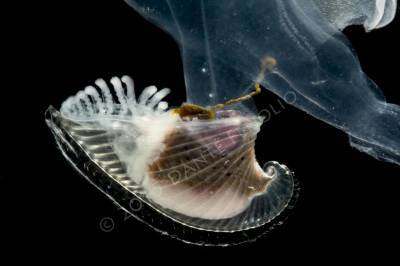 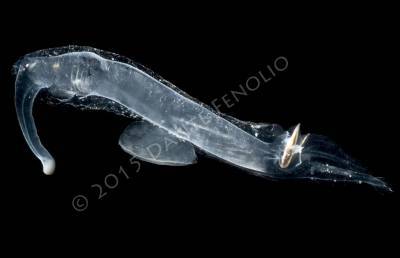 Squirt is back! The DEEPEND scientists found a nifty seed shrimp. Seed shrimp are crustaceans, just like the Blind Lobster we talked about last time. Sometimes seed shrimp are called "mussel shrimp." This is because they have two shells that surround their bodies, just like a mussel. Seed shrimp belong to a group of crustaceans called ostracods. There are about 8,000 living species of ostracods. Ostracods can be found in almost any water environment on Earth, including deep seas, polar seas, freshwater ponds, and tropical beaches. Five species of ostracods are known to live in the ocean.

Ostracods are tiny animals. The average size of an ostracod is about 1 mm. That's only about the tip of a sharp pencil! But some species of ostracods, like Giant Ostracods, can grow to be 32 mm. Draw 32 dots right next to each other using a sharp pencil. Look at how big they can get! The seed shrimp the DEEPEND scientists caught was about the size of a green pea.

Remember the post on bioluminescence? Bioluminescence helps ostracods catch prey because they can see when their prey bioluminescence. Ostracods eat small prey such as copepods, mysids, chaetognaths, medusae, and even small fish. I hope the DEEPEND scientists catch some of these for us to see!

Do you see the purple spots inside the seed shrimp the DEEPEND scientists caught? They are eggs! Giant Ostracods store their eggs internally. The eggs develop there until they are ready to hatch. Then the young are released into the ocean.

Squirt here with some more fascinating photos! The DEEPEND scientists have been busy taking photographs of recent catches in the MOCNESS nets. First, let's look at the Waryfish, Scopelosaurus smithi (Sco-pel-o-saur-us smi-thi). Look at that pattern. What land animal does that pattern remind you of? It kind of looks like the pattern you seen on a giraffe!

Next up is a Deepwater Flounder (Monolene sessilicauda). This photograph is of a young flounder who is still growing to be an adult. Many species of invertebrates and fishes like the Deepwater Flounder have a dispersing immature (also called larval) stage that develops in the open ocean. I can't wait to see what a grown up Deepwater Flounder will look like. I hope the DEEPEND scientists catch one!

The last photograph I have to share with you today is a Blind Lobster. Lobsters belong to a group of animals called crustaceans. Crabs, crayfishes, and shrimps are also crustaceans. Crustaceans have a hard exoskeleton that helps protect them. An exoskeleton surrounds the body kind of like the padding you wear to play football. Crustaceans also have bilateral symmetry. Bilateral symmetry means the body can be divided into two almost identical sides. You and I also have bilateral symmetry! Imagine dividing yourself from head to toe, each side would look almost the same.

I hope you enjoyed the photographs. I did! See you next time!

A Closer Look at the Dragonfish

Posted by Denise Kendall on Thursday, 21 May 2015 in News

Hi Everyone! Squirt here! Are you ready to learn some more about bioluminescence and the amazing Dragonfish?

In nature, bioluminescent organisms produce light in a variety of colors from violet to red to green to blue. It’s estimated that 90% of all animals in the twilight depths of the ocean (200 – 1000 meters) are bioluminescent, including some of my squid cousins! Other types of organisms that are bioluminescent in the ocean, including jellyfish, bacteria, and fishes. Many of these organisms emit blue-green light, as these colors are the most easily visible in the deep ocean .

Remember the Dragonfish the DEEPEND scientists caught in the MOCNESS nets?  We saw all of its teeth and the barbel hanging down from its chin. The barbel glows as chemical energy is changed into light energy. As the barbel glows the Dragonfish can use it to attract food. I would find a glowing object interesting enough to see what it is, wouldn't you? Yikes, I guess I would be someone's food!